About: Amplified Voices is a graduate student-led initiative in the Department of Psychology at Arizona State University, designed to provide a platform that honors and celebrates BIPOC scholars. Diversity speaker series traditionally reach the short-term goal of providing representation for scholars of color, However, this brief exposure fails to address the deeper political alienation students of color often experience within academia. The Amplified Voices series attempts to address this void by extending beyond mere representation to building community by bookending every guest presentation with opportunities for community preparation and practice. ASU Psychology community members will be provided with speaker-curated resources as a primer for the presentations. To facilitate post-event practice, each presentation will include calls-to-action (CTAs) to activate change. These CTAs will be ongoing calls aimed at addressing areas of growth, particularly as they relate to race relations and other intersectional social justice issues. 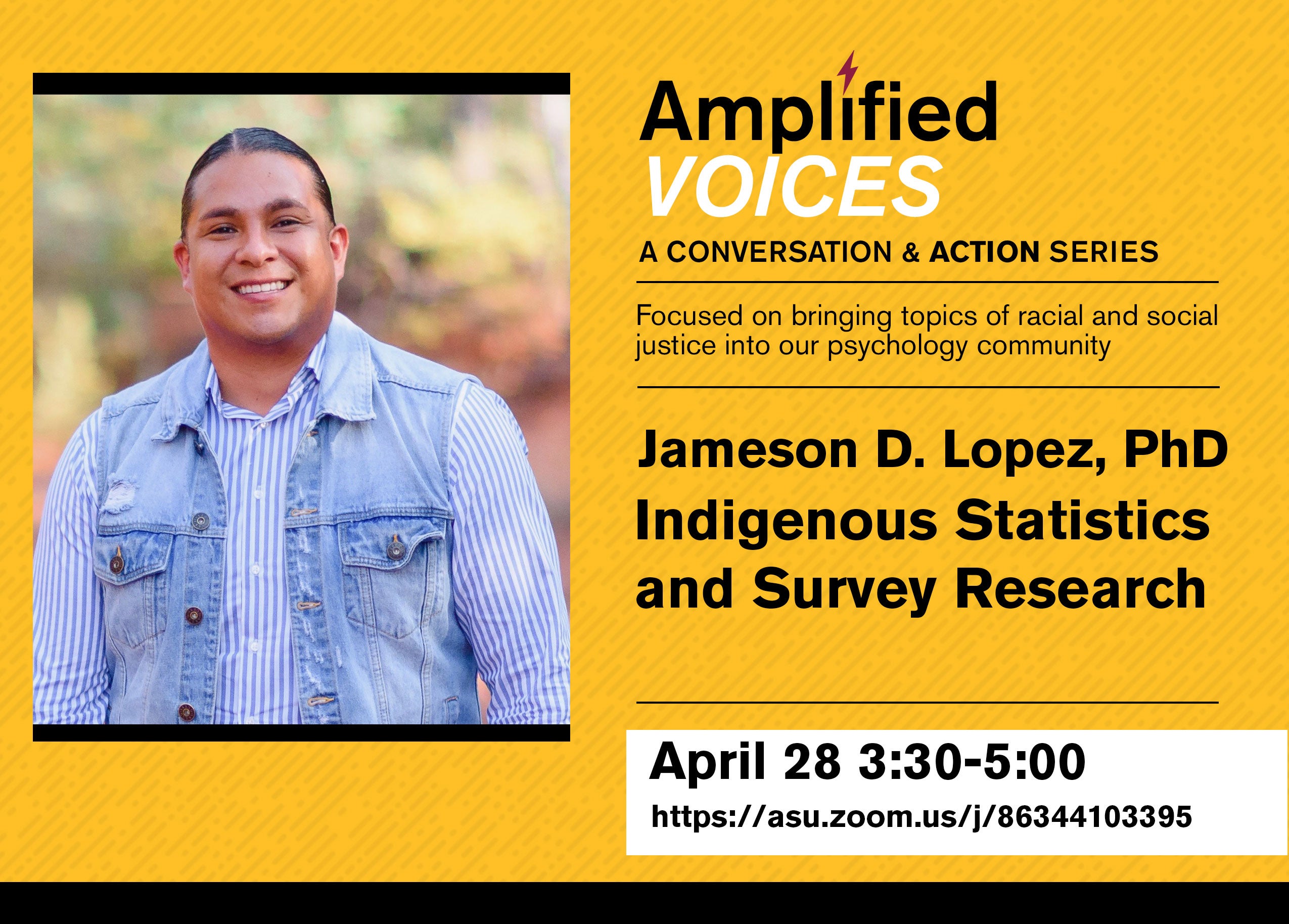 Jameson D. Lopez is an enrolled member of the Quechan tribe located in Fort Yuma, California. He currently serves as an Assistant Professor. He studies Native American postsecondary education using Indigenous statistics and has expertise in the limitations of collecting and applying quantitative results to Indigenous populations. He carries unique experiences to his research that include a 2010 deployment to Iraq as a platoon leader where he received a bronze star medal. Most importantly, he is a proud father of two beautiful children, Luna and Gordon, and proud husband to his partner Ashley.

Description:
In this talk, JD will present his scholarship that carves out approaches to Indigenous quantitative methods and demonstrates scholarly impact that thematically develops how we can speak to Native nation building and Indigenous data sovereignty using statistics.  He reinforces the idea that quantitative research also belongs to Indigenous people and fundamentally is changing how we conduct Indigenous research in the field.

To prepare for the talk, attendees are encouraged to watch the following 10-minute short film: Kwanamii | Protectors of the Quechan https://vimeo.com/372466640 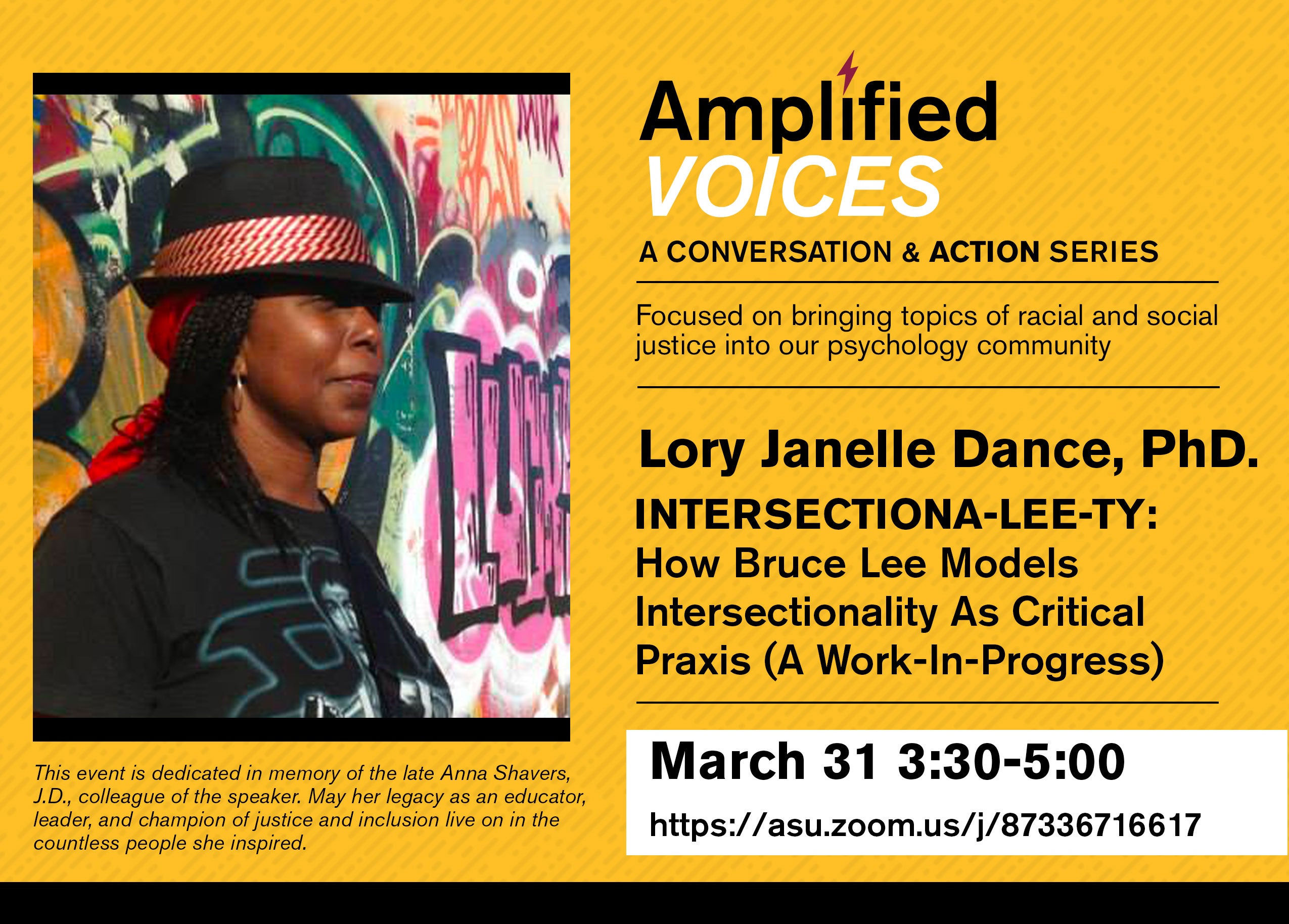 Call to Action: Think of recent instances of bullying. Is there an anti-bully action you can take, if so what is it? Can you turn your artistic/creative/poetic/athletic ability or genius into an axis of activism around which solidarity can be built? If so, what is the first step you will take?

Bio
Born in Niagara Falls, New York but reared in Southern Virginia, Lory Janelle Dance is now a Husker and Associate Professor of Sociology and Ethnic Studies at the University of Nebraska-Lincoln (UNL). Her areas of specialization include Racial and Ethnic Groups, Qualitative Methods, and Comparative and Cross-National Case Studies. Dance's publications include “Ideal Dialogues with Immigrants of Color in Sweden and the United States,” Journal of Ethnographic and Qualitative Research in 2019, “Performativity Pressures at Urban Schools in Sweden and New York,” Ethnography and Education in 2014, and “More Like Jazz Than Classical: Reciprocal Interactions Among Educational Researchers and Respondents,” Harvard Educational Review in 2010. Dance is currently completing a book manuscript titled Gone With the Neo-Liberal Wind: Minority Teens, School Reform, and Urban Change in Sweden and the U.S.

When not in the U.S., Dance is a Visiting Senior Researcher in Sweden at Lund University’s (LU) Human Rights Studies Program. Through her work at LU, Dance has established a symposium series called Streetposia, which refers to cross-national symposia that use poetic expressions to engage youths from marginalized urban backgrounds in critical debates, empowering dialogues, and life changing experiences. For more information see www.streetposia.org.

Description:
In these times that fuel Abusive Power, we need models of Synergistic Power; awe-inspiring athletes of the past like Bruce Lee. As an Asian American often treated as an “oriental” stereotype, Bruce Lee once said: “You know what I want to think of myself? As a human being. Because…under the sky, under the heavens there is but one family. It just so happens that people are different” (Nguyen 2020). Lee had multiple and intersecting identity differences from the White American mainstream (e.g., in regard to race, perceived nationality, religion). Lee used his knowledge of these intersecting identities to fight bigotry instead of dehumanizing those with less power. Though Bruce Lee may have never uttered the concept “Intersectionality,” his anti-racist, anti-colonial, and anti-nativist approaches to dealing with actual inequities, parallel the problem-solving approaches of intersectionality as critical praxis.

Preparation:
To prepare for the talk, attendees are encouraged to watch the following video: Intersectionality, Activism, and Political Solidarity: https://www.youtube.com/watch?v=R1je9h4zzHc to gain familiarity with Patricia Hill Collins’ notion of extended definitions of activism 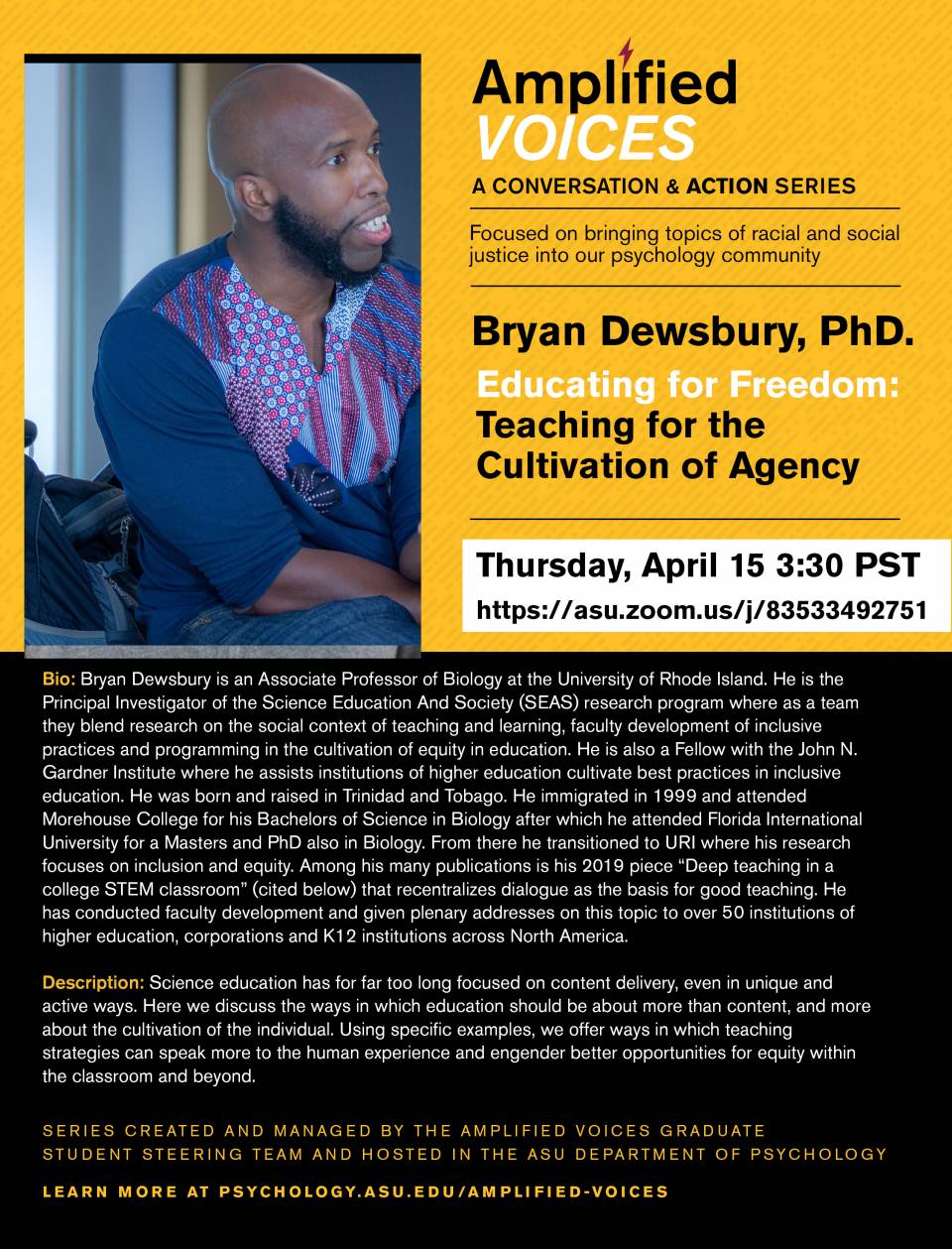 Bio: Bryan Dewsbury is an Associate Professor of Biology at the University of Rhode Island. He is the Principal Investigator of the Science Education And Society (SEAS) research program where as a team they blend research on the social context of teaching and learning, faculty development of inclusive practices and programming in the cultivation of equity in education. He is also a Fellow with the John N. Gardner Institute where he assists institutions of higher education to cultivate best practices in inclusive education. He was born and raised in Trinidad and Tobago. He immigrated in 1999 and attended Morehouse College for his Bachelors of Science in Biology after which he attended Florida International University for a Masters and PhD also in Biology. From there he transitioned to URI where his research focuses on inclusion and equity. Among his many publications is his 2019 piece “Deep teaching in a college STEM classroom” (cited below) that recentralizes dialogue as the basis for good teaching. He has conducted faculty development and given plenary addresses on this topic to over 50 institutions of higher education, corporations and K12 institutions across North America.

Description: Science education has for far too long focused on content delivery, even in unique and active ways. Here we discuss the ways in which education should be about more than content, and more about the cultivation of the individual. Using specific examples, we offer ways in which teaching strategies can speak more to the human experience and engender better opportunities for equity within the classroom and beyond. 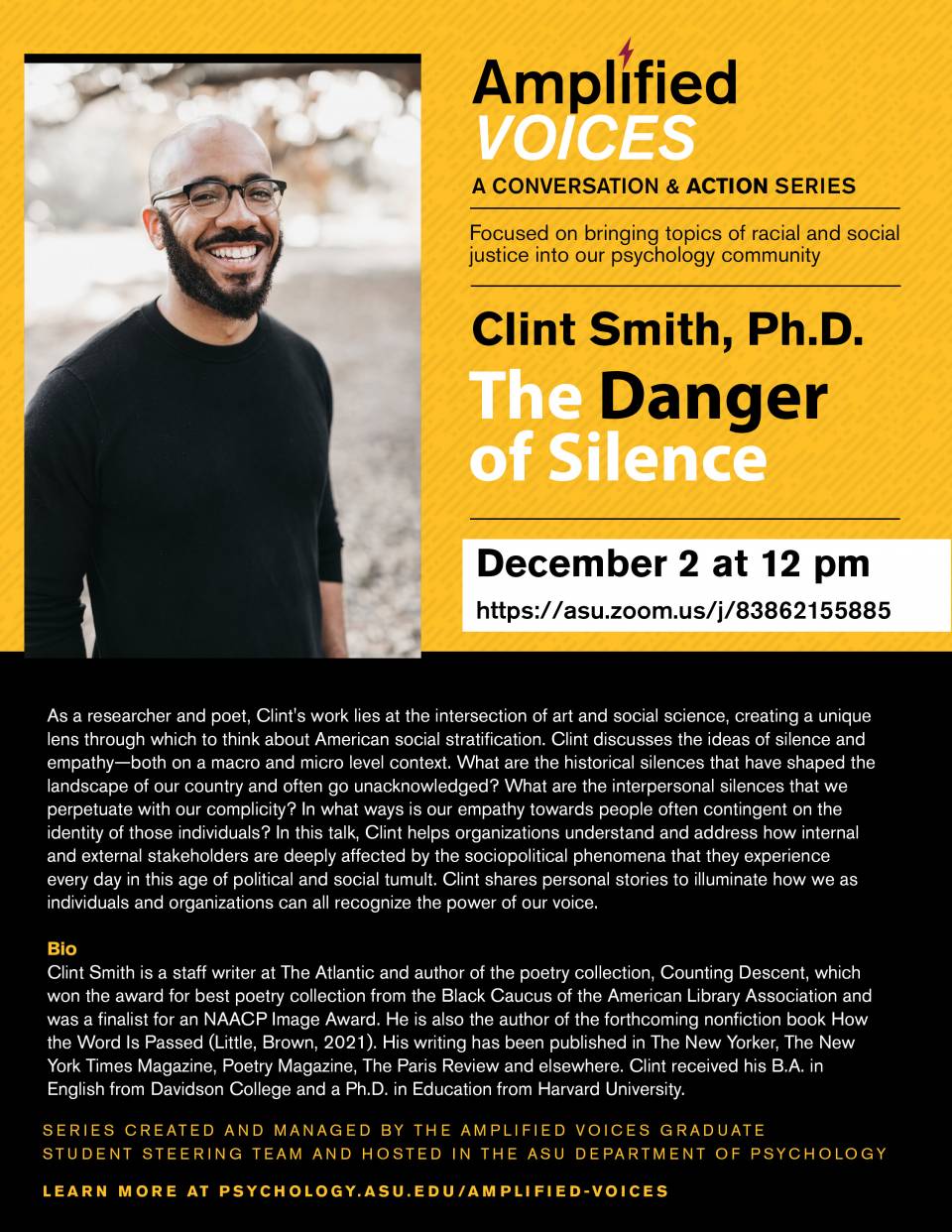 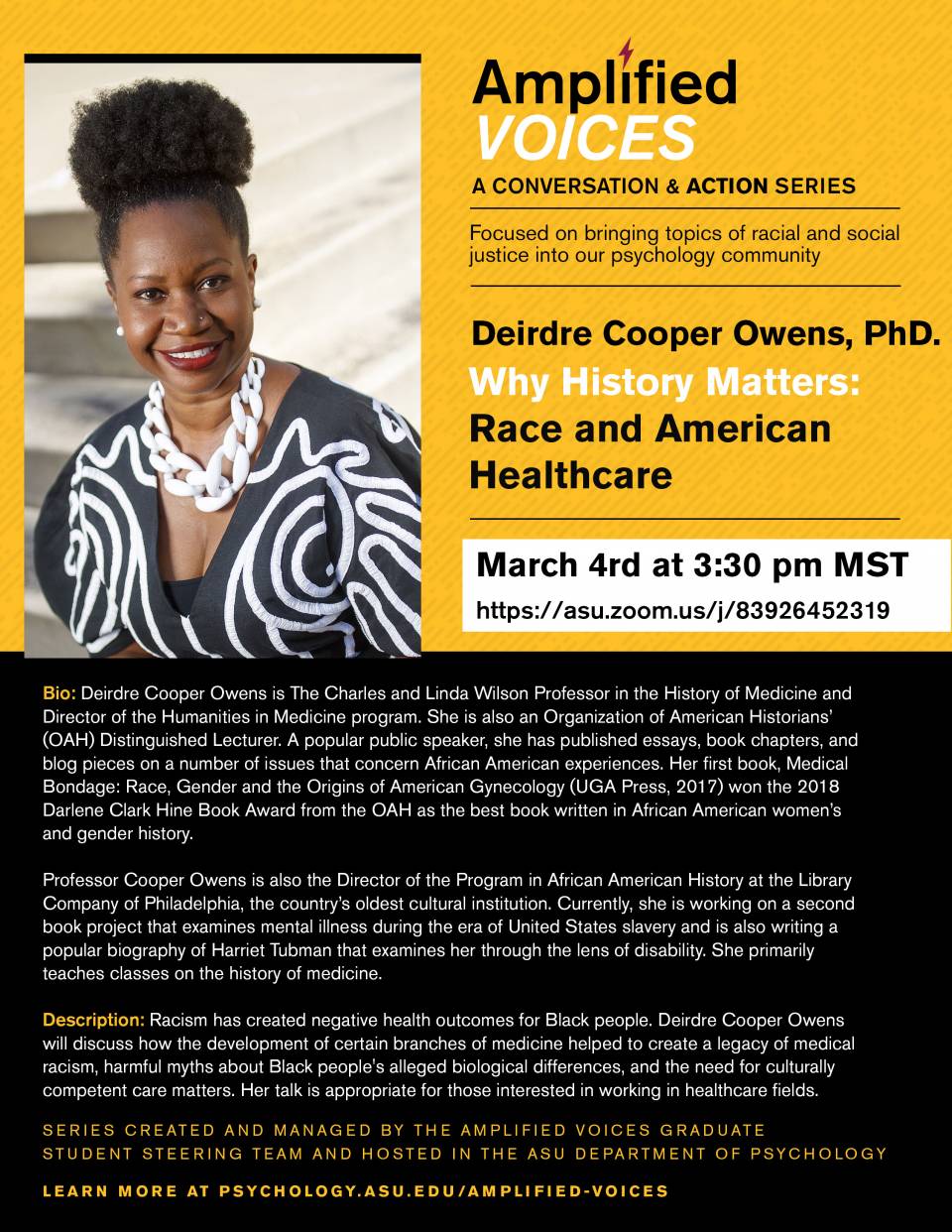 The Danger of Silence

As a researcher and poet, Clint's work lies at the intersection of art and social science, creating a unique lens through which to think about American social stratification. Clint discusses the ideas of silence and empathy—both on a macro and micro level context. What are the historical silences that have shaped the landscape of our country and often go unacknowledged? What are the interpersonal silences that we perpetuate with our complicity? In what ways is our empathy towards people often contingent on the identity of those individuals? In this talk, Clint helps organizations understand and address how internal and external stakeholders are deeply affected by the sociopolitical phenomena that they experience every day in this age of political and social tumult. Clint shares personal stories to illuminate how we as individuals and organizations can all recognize the power of our voice.

Clint Smith is a staff writer at The Atlantic and author of the poetry collection, Counting Descent, which won the award for best poetry collection from the Black Caucus of the American Library Association and was a finalist for an NAACP Image Award. He is also the author of the forthcoming nonfiction book How the Word Is Passed (Little, Brown, 2021). His writing has been published in The New Yorker, The New York Times Magazine, Poetry Magazine, The Paris Review and elsewhere. Clint received his B.A. in English from Davidson College and a Ph.D. in Education from Harvard University.

Click here for the Link to Replay of Webinar

CTA #1: Advocate for yourself or select someone you trust to do so.
Within the healthcare field, like many American industries, there is voluminous data on the harmful effects of medical racism on Black patients. To best protect our health, physically and emotionally, I urge us to seek out patient advocates who can work on our behalf and to advocate for treatment needs in other settings such as therapy. https://www.patientadvocate.org/connect-with-services/_

CTA #2: Create representative syllabi (educators) & seek diverse sources (students)
Your syllabi should not replicate outdated, imprecise, and dangerous narratives about racially minoritized people that depict them as pathological. You should include authors who represent this nation's diversity (i.e. women, immigrant, racially minoritized people, authors across the gender and sexual identity spectrum, and those who are disabled). Students should hold their professors accountable for this and seek diverse authors in their independent research.

CTA #3: Share your story
The history of Black people in the United States is tied to a deeply rich oral tradition. Make space to tell your medical stories of both trauma and healing as a way to build and honor community and as an act of resilience when medical providers refuse to honor your experiences and stories. Out of this practice, you can continue to develop compassion towards the restoration and maintenance of better health outcomes. 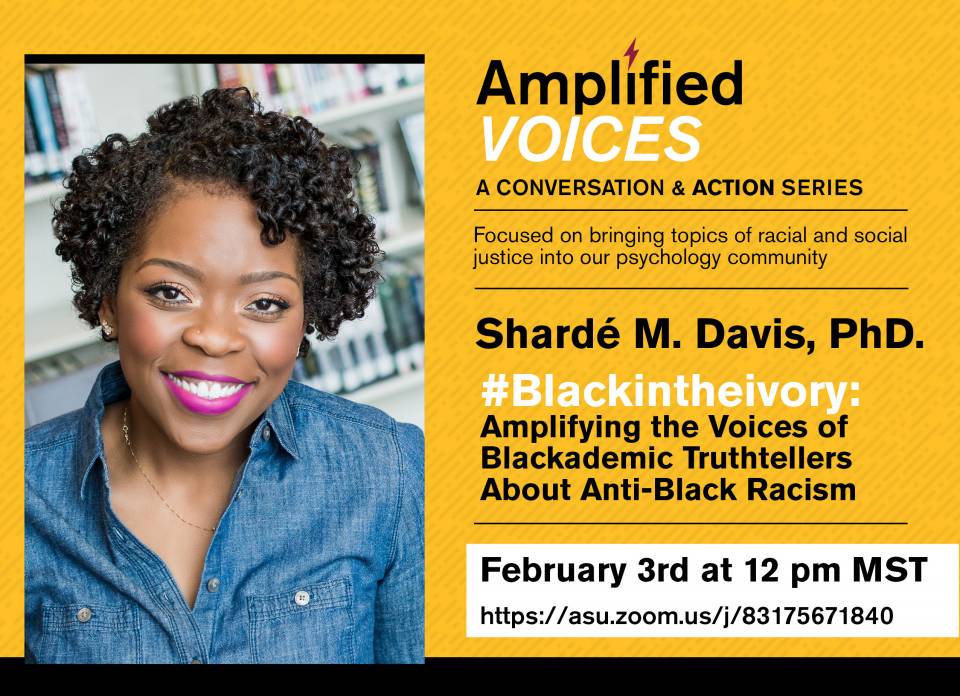 #Blackintheivroy: Amplifying the Voices of Blackademic Truthtellers About Anti-Black Racism

Dr. Shardé M. Davis will discuss the concurrent struggles and triumphs of being Black in the Ivory and how Blackademics (faculty and graduate students) can stand in our right as "truth tellers" to talk back and resist the racist systems that have historically oppressed us. When Blackademics tell our truth it has the possibility of empowering us all, yet this empowerment comes with great risk, institutionalized exploitation, and conspicuous consumption of our narratives. The benefits and costs are intricately connected and must be discussed as such. Dr. Davis will also offer personal accounts of how truth telling has unfolded in her life and how she has named, maneuvered, confronted, and resisted the problematic systems that are embedded within the academy. By the end of this talk, Dr. Davis will demonstrate the various ways that racism eats its way through the ivory tower and offer prescriptions about how academic institutions—and its individual members—might make lasting change. As preparation for this event, The Amplified Voices team suggests familiarizing yourself with the conversations on social media under the hashtag #BlackInTheIvory."

Dr. Shardé M. Davis is an Assistant Professor in the Department of Communication at the University of Connecticut and is the creator of the viral Twitter hashtag, #BlackintheIvory.

CTA #1 A Renovation is Overdue

It’s time to get serious about uprooting anti-Black racism, anti-Blackness, and white supremacy from the university structure. A critical first step is naming these specific issues and voicing an explicit commitment to enact change within your immediate sphere of influence.

Before you do anti-racism work in the university, you should turn inward and consider the extent to which you perpetuate these beliefs “at home.”

Quite simply, universities should engage in efforts that support racial equity by setting aside dedicated, institutional resources and dollars for Blackademics only.

There are simple yet impactful behaviors that everyone can employ day to day to begin changing the communication climate.

The Amplified Voices project was conceived and is coordinated by a team of graduate students in the Department of Psychology.